There once lived a Little Lion who was very much in love with a Magic Sword.

Magic Sword however was just teasing Little Lion. Together they lived in a house so big, that days could go past without them seeing each other even for a moment.

Little Lion had eyes for nothing else in the world. Magic Sword probably felt less so…

When they met, all Little Lion could do, was just to stare at Magic Sword, captivated. When they departed again - bitter tears Little Lion cried for being such a fool: “How can anyone give so much love to someone, who’s actions could only hurt them in return!’’

One evening  - after already countless lonely weeks had passed, and roars no matter how loud and wretched didn’t seem to bring Magic Sword back - Little Lion’s eye caught a glimpse of something behind the curtains.

‘’How could you have left me alone for all this time? Did you not hear how I cried for you?’’ shouted Little Lion. Magic Sword looked much less shiny and beautiful as it usually did and was reluctant to say a word.

After a short and silent confrontation Magic Sword got up and with using all their sorcery eventually remained hanging down blade first from the ceiling - right above Little Lions head.

Little Lion knew this was the end, and that Magic Sword was very much over their peculiar relationship. ‘’Not only have I now lost you, my pride too has been hurt! Yet I shall remain lying down here with you hanging above my head as long as my little heart will keep me and all my love for you alive.’’

Days passed and Magic Sword grew more and more sick of Little Lion’s blind and foolish admiration: ‘’I am only up here, because I am waiting for you to leave.’’, but Little Lion didn’t go. Magic Sword had no idea why Little Lion even loved them so much.

Finally, after 30 days had passed, Magic Sword could no longer handle seeing Little Lion in this pathetic state. Little Lions’ eyes were weary, still trying to gaze at Magic Sword high up above, with their little heart only just beating very slowly.  So did Magic Sword decide, that Little Lion needed to be finally freed from the curse they’d created together. Suddenly Little Lion noticed some movement up in the ceiling.

’’This is all I could ever give to you and if this is what you really want so be it!’’-  and with those words Magic Sword dropped down from the ceiling straight into Little Lions little heart. 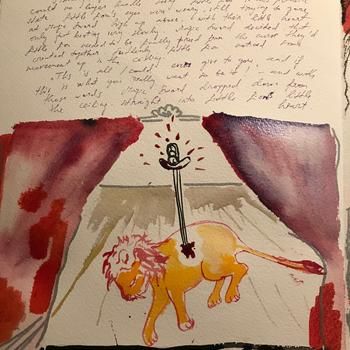 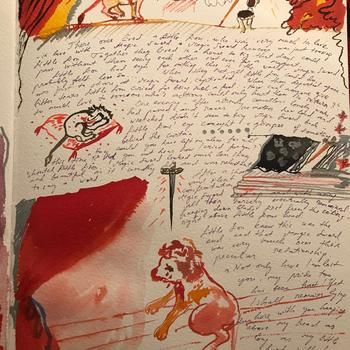