What is the ideal / non-ideal environment for potatoes to sprout? What does this dark chamber consist of? About the effect of trauma on the digestive system – have you ever read the book “The Body Keeps the Score”? Also, tell me more about giving it a voice? What is the voice? Who does the voice belong to? What's the relationship between giving something a physical, material body versus giving it a voice? Can the uncanny gut feeling be addressed without manifesting or thriving towards something that is 'better' or 'healthier'?

I think potatoes sprout best when you don’t want them to sprout. Or, when they are left in a dark corner for too long. What if this dark chamber is your gut? Imagine swallowing a fist-sized, raw potato. Imagine it sitting in your stomach, immune to gastric acid. Thus it travels further down your gut in one piece - slow enough to start sprouting there… clawing its barbs into the intestinal membrane. It’s a place where things grow and take root unnoticed. It’s very alive.

The title „Swallowing a Barbed Wire“ refers to the visual similarity between the potatoes’ sprouts and barbed wire. The potato is a metaphor for things that are swallowed unconsciously or involuntary - ingested external triggers in the everyday environment that disrupt the smooth flow of digestion. I am specifically interested in fear and anxiety triggers. When I am afraid or anxious, my gut becomes the emotion. It’s omnipresent yet ungraspable. Building a 23-meter-long gut from artificial membranes, letting used engine oil run through them and casting potatoes in iron is an attempt to grasp at an uncanny gut feeling. I also experiment with giving it a voice.

When thinking about how to materialize a gut feeling, different forms and formats emerged. Working at the intersection of performing and visual arts, I enjoy investigating physicality from both angles and experiment with the relationships between them. During a residency in a residency at ID_Tanzhaus Rhein Main in May this year, I mainly studied movement, voice and noise in a rehearsal space as well as outside. The Cellar Hall inspired me to invest more in an installative environment and a sculptural body that can enter into dialogue with a voice separating itself from its human host. I am interested in letting these elements oscillate between being in the foreground or the background, mixing up hierarchical set-ups. I am curious where this approach will lead me and to see how those different entities will affect and transform each other.

Seeing the installation and listening to the voice, I am not even sure if the uncanny gut feeling was a bad thing in the first place. I guess that depends on how bodies are perceived. In capitalist societies the 'good' and 'healthy' body is one that is neat, clean, balanced and overall functioning while I think that leaking, dripping or spitting are essential features to maintain ourselves. At the same time, I am not arguing for a fluid body without any boundaries to its surroundings to be a better body. It’s vital to be able to filter what enters and to choose what can leave. 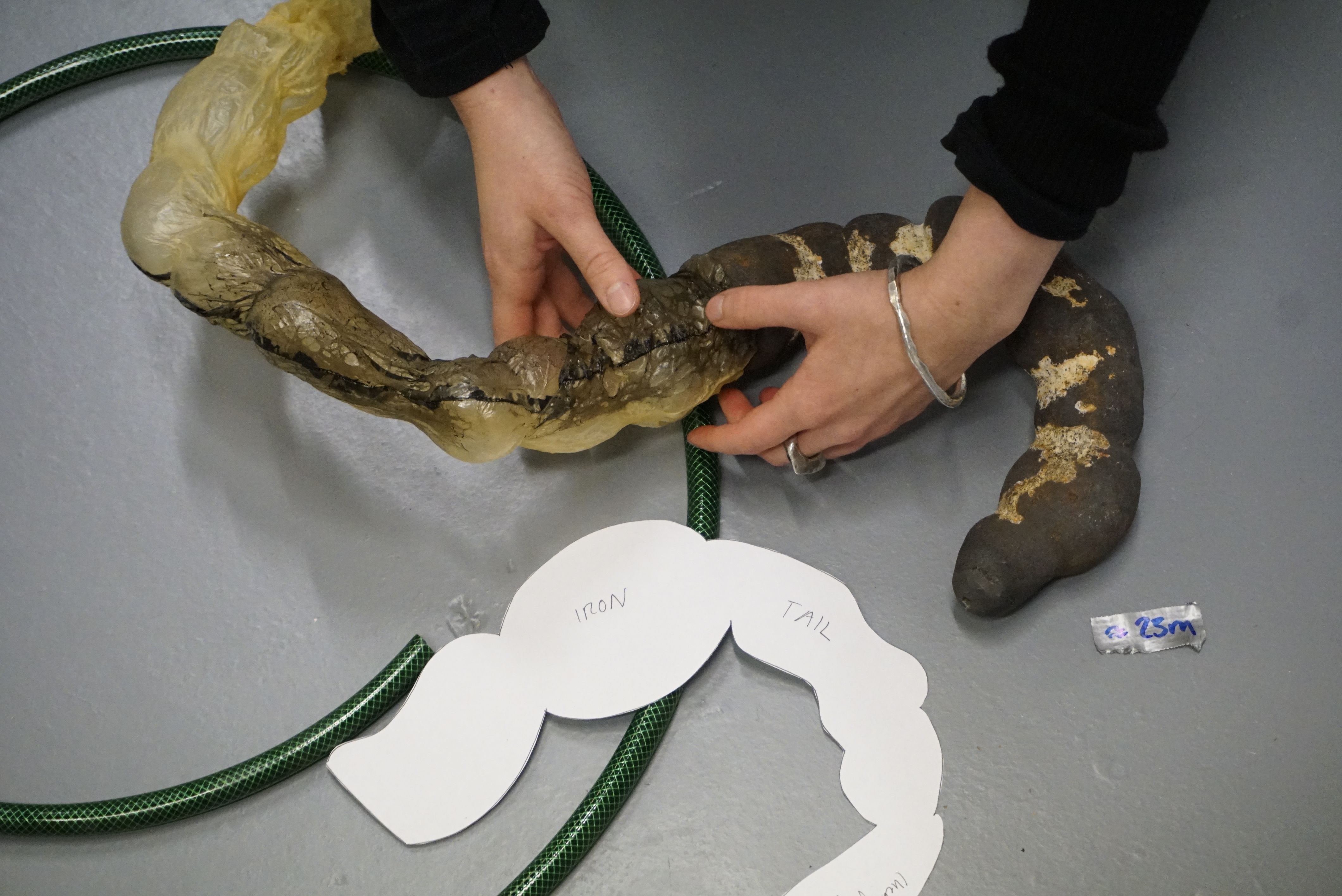 Lived experiences do not only leave traces on the mind but also in the flesh. My interest in those traces is not directly oriented towards treatment and healing. I am curious to investigate the materiality of emotions such as fear and anxiety as an alternative to examining their cause and see where those spatial manifestations lead me. The tangled nature of triggers often makes them hard to be identified so folding this bundle into space is an artistic gesture of looking from inside out instead of from outside in.

My approach to the voice is inspired by Anna Zett’s book „Artificial Gut Feeling“ that I encountered at Lugemik bookshop around a year ago. In the second piece „I’ve Got the Power, Agathe Bauer“, the author writes about a disembodied voice located in their head continuously accompanying them since childhood. They write that the voice was „powerful in a sick way, not in the pleasant way, and it was vibrating all over me, from my guts to my brain and back again.” A few months ago, I happened to be a listener of a dear friend’s experiments on voicing the subconscious. Since then, Hanna Launikovich aka laǔni and I collaborate on the idea of an inner speech from the guts.

The voice doesn’t have a body. The voice is a gut feeling - the discomfort, fear and anxiety. The gut is its shell and shelter from which it can speak. Its tone is slightly judgmental, putting itself in a superior position over the bodies it is hosted by. But it also has a strange sense of humor that makes it easy for the listener to identify with it. Similar to the installation, its effect is physical and sensual - in both a seductive and horrific way.

In November 2022 Mara Kirchberg [she/her] is the Cellar Hall resident in Kanuti Gildi SAAL. Mara is a transdisciplinary artist based in Tallinn who works at the intersection of performance, installation and sculpture. Her work deals with the materiality of flesh and the fleshiness of material. She is interested in boundary objects such as organs and negotiates the surfaces that simultaneously connect inside and outside. Her work opens interior spaces to the outside to reveal how bodies - human and otherwise - function or how their functionality is disrupted. Her practice commits to ways of composing through decomposition and often involves unreliable materials such as organic matter or unfired clay. She considers broken pieces a fertile ground for a new body of work that contains suggestions for how to do less and digest existent surplus. Read more about her residency here.