A physical-psychedelic introspective tragedy in a comic-poetic key. Or vice versa. It all depends on your viewpoint.

This very physical, comic and when necessary even blissfully tragic production demonstrates that when the theatre is alive, the classical narrative can be discarded without any qualms. - Keiu Virro, Eesti Päevaleht.

Renate Keerd has managed to take the physical means of expression and create a completely universal stage language easily understood by all, and its resourcefulness, wittiness and boundless humour never cease to surprise. It speaks to those who are looking for laughs as well as those who seek more profound philosophical ideas. - Põim Kama, Postimees

Renate Keerd is freelance director and choreographer. Her productions have been performed in numerous theatre and dance festivals in Europe, Scandinavia and Asia. Her works have been described as provocative, humorous, inventive, poetic, witty and sharp. She has received the Philip Morris Estonia Dance Award twice. In 2015 her performance PURE MIND won the Grand Prix in an International Theatre Festival held in Minsk. In 2016 she was the laureate of Estonian Annual Theatre Awards. In 2012 she founded her own physical theatre company – Kompanii NII. 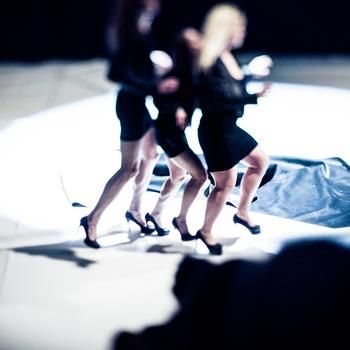