Supported by: Cultural Endowment of Estonia, Tallinn Department of Culture

Strøm are Gaudenz Badrutt (electronics) and Christian Müller (electronics). They are working together for 15 years and have played numerous concerts all over Europe and realized many musical and interdisciplinary projects. The artistic practice of the Swiss duo is first and foremost syncretic: it recombines free improvisation with conceptual music, contemporary music ideas with noise explosions, minimalism and drone, construction with disruption. A massive amount of effects pedals, two computers used as live samplers and loads of cables and switches are the duo's machinery: an instrument with a life on its own to play with the unpredictable. The electronics does not only influence the sound itself, but also the musicians in their play. Without being awake, alert and fast it doesn't work. Without not knowing where to end up, they don't even start.

Gaudenz Badrutt began his career as a pianist in the field of contemporary classic music and spent the past 15 years as an electronics musician in the field of improvised, experimental music. He is best known in current times as an improvising electronics musician using computers (sampling) and various other electronic apparatus. Filigree, minimal noises, drones and dense structures are key characteristics of his music. Central to Badrutt’s activities are the working-band duo strøm with Christian Müller (electronics), the duo with Hans Koch (bass clarinet, sopranosaxophone) and the duo with Jonas Kocher (accordion). He is further occupied in the fields of electronic composition and sound & video installation.

Christian Müller, born in 1971 near Basel, Switzerland, is clarinettist and electronic-musician. He completed his classical studies at the Conservatory for Music & Theater Berne in 1996 with a teacher's diploma and in 1998 with a Reifediplom (Master). 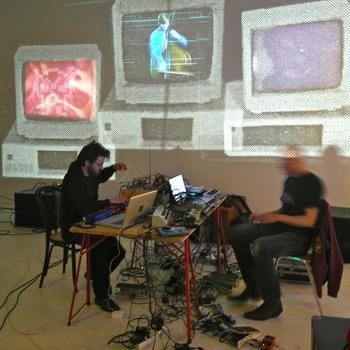