The weight of the glacier had pushed the land down over millennia. As the sun’s patient radiation reached the surface of the white weight again, what had in the past been valleys became fjords and tides flowed as rivers across the landscape. Soon the aquatic apes returned. Building settlements on former mountain peaks, now surrounded by water. The apes’ bodies were slow in the heavy water. But with the weight of the water came buoyancy. The Aquatic Apes discovered how to hollow giant trees with fire. Making concave pockets that floated on the dense water. Soon they mastered riding on the deltas and wetlands in these giant hollow shapes. The floating shapes got bigger as the apes mastered building them and they learned to use them to carry anything that was heavier than water. They moved large monoliths from distant quarries lowering them down to shallow water. The now megalithic structures slowly rose from the water and as the apes evolved with the rising land, the memory of levitation in this region disappeared.   Eons later the apes harnessed the ability to transform water into light. Giant concrete structures gathered water and altered it into pure energy. The energy became information that rode on pulses of light beneath the oceans, performing its creator’s will anywhere on the planet.

Turtles all the way down.

Each sphere a rainbow reflection of its own reality.

Born in 1979 in Reykjavík, Kolbeinn Hugi is an island dwelling artist of a generation that emerged in the wake of the cataclysmic great rift between art and artists in the bleak neo-capitalist Reykjavík of modern times.

Kolbeinn has developed a complex audiovisual language, using found materials, water-foam, fabrics and layered synthesized soundscapes. Visual motifs of pyramids and diamonds create ritualistic system within his work. Often using the body as a tool or a vehicle for ideas within his practice, recurring themes within his works have included, absurd realities, dream spaces, utopian projections and man’s modern day disconnect and systematic alienation from the environment.
Kolbeinn was contacted by Edgar Cayce in the informal setting of dream state trances established by the great sleeping medium after his death in 1945. There, he absorbed the acute sensibility to time and space associated with Cayce’s phantom sculptures as set up in his Astral Pavilion.

Kolbeinn’s work is simple work that doesn’t need explanation and aims for the heart, not for the head.

His work has been exhibited widely around the western world, and is preserved in the collection of the National Gallery of Iceland.
kolbeinnhugi.net

The Future Must Be Destroyed Yesterday

The Future Must Be Destroyed Yesterday 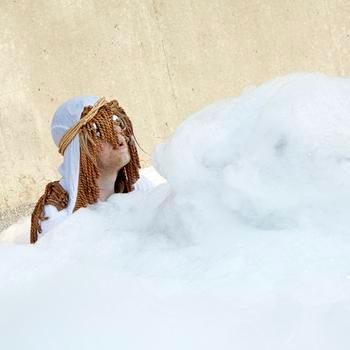