Birth of Venus by Kris Lemsalu ranks among those works of the artist that serve as eulogies and reflections on loss and breaking free at the same time. In spite of the thoroughly personal initial impetus, the artist’ s thoughts reach the spectator in a generalized pattern carrying an immense charge and rich in visual language.Kris Lemsalu: ‘ It has somehow come to pass – to my own puzzlement – that whenever someone close to me dies, I create a new work thinking about them, about death in general. And so, it is as if I am building up a kind of collection of tombstones, eulogies that transmit greetings to the other side. The anamnesis of Birth of Venus is that a friend of mine checked out, and so did Louise Bourgeois on that very same day. The listlessness and the will to live triggered simultaneously at moments like that make you want to throw up violently. At the time I went to the natural history museum in Vienna and experienced cathartic laughter when I saw that Venus of Willendorf is the size of a pack of cigarettes. The hope that everything was still ahead returned, bit by bit.

Kris Lemsalu (b. 1985) is an artist based in Tallinn, Vienna and Berlin. She has studied at the Estonian Academy of Arts in Tallinn, Danmarks Designskole in Copenhagen, and at the Academy of Fine Arts in Vienna.Having studied ceramics at the Art Academy in Estonia, Lemsalu often experiments with traditional techniques to create her multilayered works. Animal body parts or delicate sculptures of clothing objects made of porcelain are mixed with found natural materials – fur, leather, wool – to create staged installations. These can be a self-sufficient sci-fi-like narratives, or alternatively act as a stage for Lemsalu’ s own performances; sometimes the sculptures become part of her costumes. Although the themes are often chilling, dark or distant, and the overall finish is rough, Lemsalu’ s works appear fragile and luxurious at the same time, highlighting the cynical aspect of art’ s desirability, as much as providing an antidote to that cynicism by means of humour and irony. 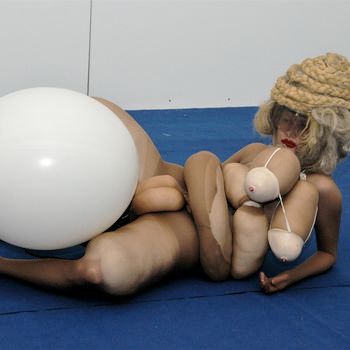