A move made cannot be unmade.

The space is Kanuti Gildi SAAL’s “white box”, the light is “white wash” and costumes “casual grey”. The genre is firstly performance art, then dance performance, then circus show and lastly visual art.
On stage there are five artists whose dance and circus technical level is perfect in the frames of technic used. There is canon, synchro, sequence, pause and more. They deal with unity and simplicity, a whole is made in unison, where five separate bodies do the same move but in different timbre or tonality.

The artists are part of a whole. There is many arms, some legs, and elbows. Mobility or immobility makes their presence fuse and stay singular simultaneously. A whole where all the singulars have merged in position or relations. If separated, there will be a blank space between them, but in terms of time, the position between them stays and they are all perceptible at all times.

Thinking of a linear line one could say, that all of this is too short or too long. The director doesn’t do that. “moiste” is a whole.

The whole team has grown out of or been involved with OMAcircus. Kristin Made does graphic design, Kädi Metsoja is a choreograph and director, Lars Schmidt makes music and sound, Kaja Kann’s a dramaturg, Margus Terasmees creates technical solutions and Alissa Šnaider, who everyday works in image consulting will try her hand in costume design. 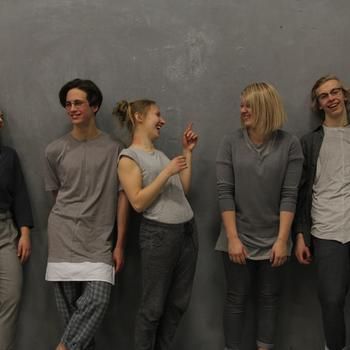 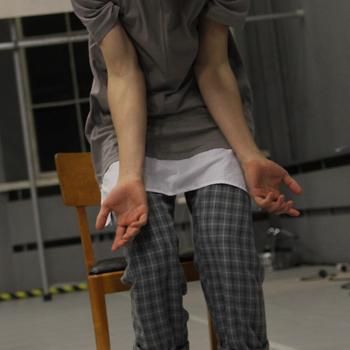