Quests performances to Tallinn are supported by The British Council and Cultural Endowment of Estonia.


Each performance is ± 40 minutes and are performed in English.


Tickets on presale at Piletilevi, at the door: 5 EUR

Performances are not meant for little children.

A salt and pepper pot for the king and queen. A ruler for the prince. A spoon for the servant. Lighter fluid for the Innkeeper. A water bottle for the messenger.

One by one, over 6 days, Forced Entertainment performers condense every Shakespeare play ever written into a series of 36 intimate and lovingly made miniatures, played out on a one metre table-top using a collection of un-extraordinary everyday objects.

Forced Entertainment have long had an obsession with virtual or described performance, exploring in different ways over the years the possibilities of conjuring extraordinary scenes, images and narratives using language alone. In a brand new direction for the company, Complete Works explores the dynamic force of narrative in a simple and idiosyncratic summary of Shakespeare’s comedies, tragedies, histories and late plays, creating worlds as vivid as they are strange.

Since forming Forced Entertainment in 1984, the six core members of the group have sustained a unique artistic partnership for more than 30 years, confirming their position as trailblazers in contemporary theatre. The company’s substantial canon of work reflects an interest in the mechanics of performance, the role of the audience and the machinations of contemporary urban life. The work is distinctive and provocative, delighting in disrupting the conventions of theatre and the expectations of audiences. Forced Entertainment’s trademark collaborative process – devising work as a group through improvisation, experimentation and debate – has made them pioneers of British avant-garde theatre and earned them an unparalleled international reputation.
2016 the company was awarded with the prestigious International Ibsen Award.

Thanks to the RSC My Shakespeare initiative, which commissioned Tim Etchells’ Be Stone No More, an early, development version of this project, as well as to the people who participated in that phase of the work.

“Forced Entertainment, having daringly shaken up traditional approaches to theatre and performance, make for playful and thought-provoking works.” PLAYS TO SEE
“The Complete Works excel in their simplicity.” THE STAGE
“A tiny boat ride across an infinite sea of plot.” FOREST FRINGE (ANDY FIELD VIA TWITTER)
“It’s a reminder that one person – armed with a story and some bric-a-brac – can create colossal worldS.” THE STAGE
“Is it possible for a jar of Roses lime marmalade to blush?” THE GUARDIAN
“If you told me a few days ago I would feel genuine empathy for a bottle of Tabasco, I’d have probably laughed in your face and called you crazy.” A YOUNGER THEATRE 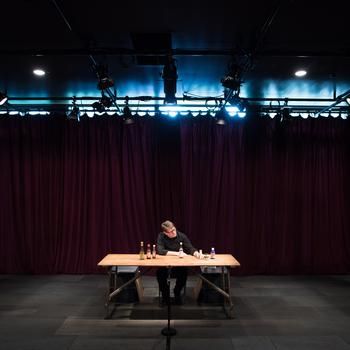