Financed from the funds of the Multiannual Program INDEPENDENT 2017-2021, as part of the "Cultural bridges" subsidy program of the Adam Mickiewicz Institute.

Starting from November 21 at 20:00 (available for free log-in for 36 hours) HERE
In Polish with Estonian subtitles


Krzysztof Warlikowski returns to the work of Hanoch Levin 12 years after the release of “Krum”, which was a great breakthrough in the stage reading of this author’s work and a huge success in Warlikowski’s career. This time, the director reaches for the „Suitcase Packers”. The time that elapsed since the first enstaging of Levin’s text marked the history of Poland and Europe with many dramatic turns. Once, Krum returned to his homeland after an unsuccessful expedition abroad, full of hope for fulfillment. Now, everyone is packing-up or dying. This great world migration of peoples in Levin’s text finds its local face and local scale, reflecting all the anxieties and movements taking place in the macro scale. The direction in which Levin’s characters are headed is unknown but, undoubtedly, everyone is trying to move as far away from “here” as possible, and yet no one wants to leave home. When returning to his favorite authors, Warlikowski never settles for well trodden paths. A rebellion is brewing, a fight of maturity against the attempted appropriation of its territory of freedom and imprisonment in peaceful regimes in exchange for submission. Life does not bring peace even without politics, even less so when the times are hot! Levin’s text, which is a starting point upon which the performance is being built, offers a wonderful gallery of characters which will be brought to life by the performative presence of Krzysztof Warlikowski’s company of Nowy Teatr in Warsaw. The play’s subtitle – „Comedy with Eight Funerals” – sounds like a subtitle of a musical piece suggesting a need to employ an excellent “orchestra” made up of great acting personalities, such as those with whom Warlikowski has been working for years.
So, we are leaving! It won’t be easy, but there will be no compromises. It’s high time we go! Let’s leave right now! 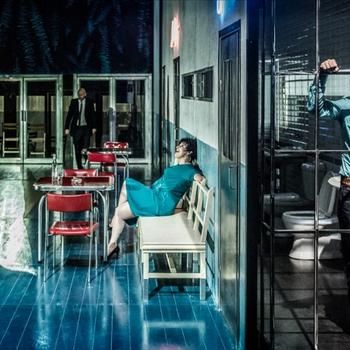