NB! Duration of the evening is 2 hours. We kindly ask you to dress according to weather. Venue is located by seaside.

Alissa Šnaider is an artist, choreographer and stylist known for her daring approach to collectivity, mediums and forms. Her sense of theatre-to-become and format-queerness is especially strong in “Three Left Hours (everybody’s piece)” (2015) which earned a special place in Estonian theatre history leaving behind a sensation that it’s probably just the beginning of what to expect from the yet-to-be-made chapters of the Weird Tales.

There is tension between dispositions of the body and the mind when the eye doesn’t know in advance what it sees and thought doesn’t know what it should make of it.

Now what do you see?

“She or he or them or it or now runs through several bodies and spaces like a mathematically engineered wave across centuries. Its awkwardness cringes on the edge of perfection and perfection is always there, like the dream where you suddenly see the manifestation of an entire life in one beautiful scene” Raimundas Malašauskas

smoke sculpting the passage of time

teardrops on the eyelashes

everything solid melting back into the air

Already after the first chapter it became clear that the aforementioned wave is transforming into a liquid, into a condensed matter which, in order to exist, requires very specific conditions. Otherwise it’s no longer fluid but vaporized to gaseous or hardened to solid state.

In his On Floating Bodies, Archimedes suggested a principle that any object, totally or partially immersed in a fluid, is buoyed up by a force equal to the weight of the fluid displaced by the object.

Landscape-cold, empty, naked; that would have united them all. *

The environment is moody; liquid state, the collaboration between evaporation and outside temperature is unpredictable; the movement of bodies, attraction and repelling is dependent on smallest variables; (non)compatibility of the organic and artificial. Processes which are designed by layers, sequences, and montage. Layers, sequences, and montage.

Look, close your eyes and now what do you see?

For one chapter, during one evening, this moment is veiled with a curtain of sea breeze. To then re-emerge.

Weird tales I have tried to write

Weird tales I have tried to write 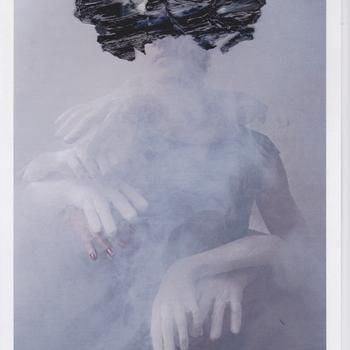