The production is based on four surrealistic texts of Alberto Giacometti: “Yesterday, Quicksand”, “A blind man reaches out the hand in the night…” , “Paris without an end” and “The dream, the Sphinx and the death of T.” The production is inspired by Giacometti’s sculptures, drawings and texts to create a visual poem of its own. His work is the starting point, like a trail, which leads to a new place. An invisible place appears where visual and performing arts unite with literature. An approach in spoken and written words, drawn and danced lines, figures, sounds and plaster castings, shells and stones.

Frank Soehnle studied the art of puppetry from 1983 to 1987 at the University of Music and Performing Arts in Stuttgart. He was artistic director of the Puppet Theatre in Karlsruhe from 1987 to 1990 and in 1991 he founded the Figurentheater Tübingen, an independent company. He works as a puppeteer, actor and director as well as a guest lecturer in many reputed international schools. He makes films for television, produces for other theatre companies and has toured in Europe, Israel, Mexico, Australia, Asia, India and the United States. 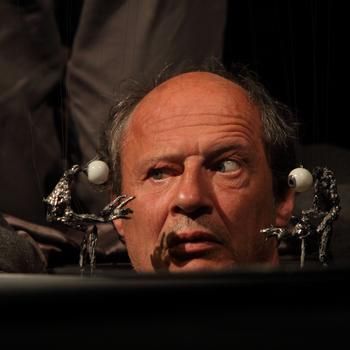