counting characters
in movement
the body
audio translates itself

There was a choir of strangers. The choir stood in an empty hall, dozing off into their collective dreams. You could feel the unknown unknown lying beneath. You could, but didn’t maybe find the words. The dusty state of collective consciousness was waved in the air like glow-in-the-dark sticks at music festivals. Wrinkles on their foreheads were narrative and meanings were preferred over feelings.

typos in movement
are called accidents
tripping is like
accidentally writing
a capital letter in the middle
of a random word
a seagull emoji in a row of
:D:D:D:D:D:D:D:D

They only existed in each other's unconsciousness, so they had all the freedom to be abstract. They definitely had beards and breasts that could’ve been hard to tell apart. Finding opposites in a non-horizontal world came as naturally as eating fries with fingers. Each other's smell they only recognised as the “smell of a performance”, not realizing a stage rarely comes with the scent of Chanel.

A seagull flew straight into the choir of strangers, making their well-ironed matching shirts polyrhythmic. It was neither the hero nor the victim - it only had the urge to participate. Just to vomit some question marks and leave. Inviting the strangers to be a part of an unknown amount of vulnerability the seagull bit off all the letters from the keyboard and spat them at the choir. “Are you accessible?” asked the seagull with an echoey voice. “Are you?”. Although individually fragile, as a choir they were the Hoover Dam.

“I’m not talking about opposition, just the feeling of the unknown. I don’t want to talk about making a change, I’m far more interested in being present in this changing world.” They always thought that if life on Earth would end, they’d move to Mars. Despite everything, each of them had a bit of Elon Musk in them.

is text just a tool?
a reflection of something
…
more real?
just a shadow on warm asphalt?

Glitter was dripping from the seagull’s mouth, filling the pockets of strangers and the sockets beneath their fingernails. “A little mouse was dancing in its own story, but then got trapped between the book covers”. Grinding their teeth strangers chew the glitter.

They were now searching for the visible texture of a brush stroke that can be seen when closely looking at a painting. A bit of human. The carefully unsculpted. So they extracted all magnesium from their stiff bodies, carefully put it in small ziplock bags and gave it to each other as gifts. To be more present, to have some kind of a connection - it sucks to be strangers. Then they rhythmically danced to the sound of waves, the ticking of clocks, the minimal noise of being safe and sound. “Your poetry machine gives a rhythm to the world.”

poetry is words
in liquid form

The seagull gathered as many words under it’s wings as there was room. It found every insecurity, impurity, asymmetry, unfinished fantasy or unconfirmed compliment and filled them with transcendent words. The trickster had become the constant in this twirlingness of a world. “Maybe yes, let’s do it the CatDog way.”

Now they were ready - ready for a guided tour through someone’s body. 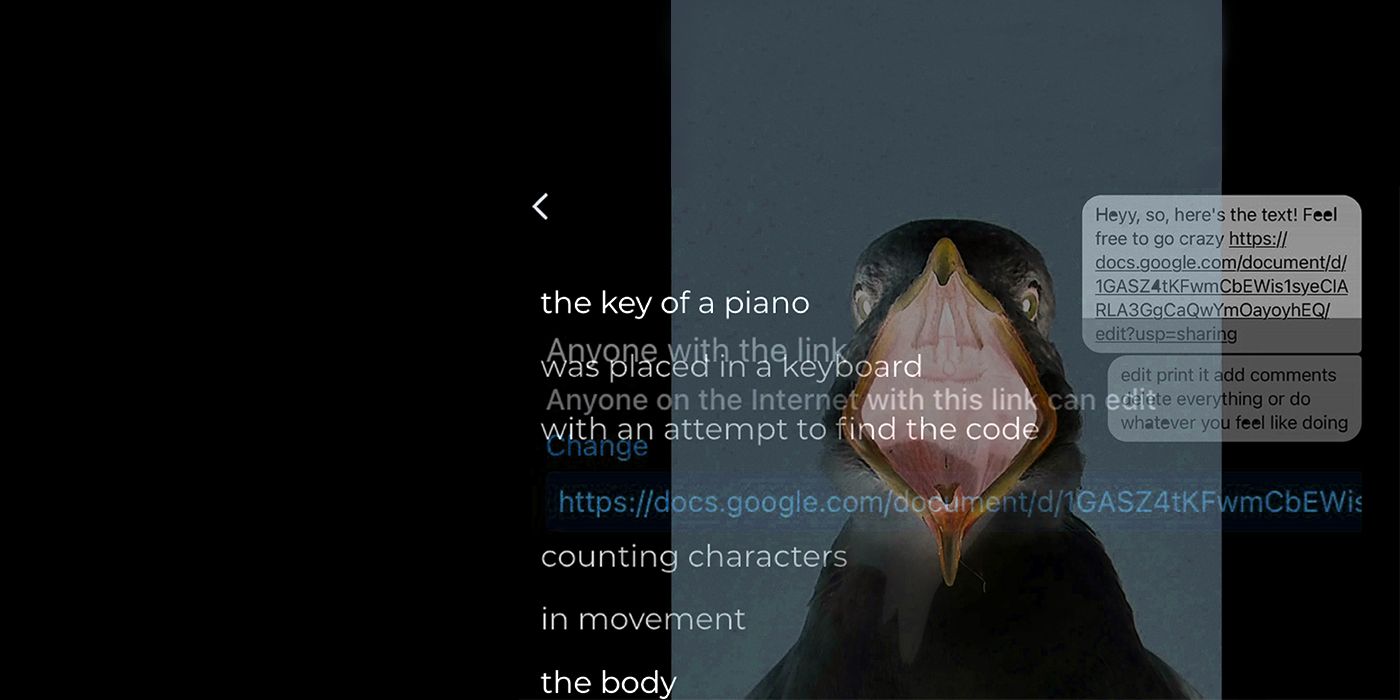