The year 2002, united dancers of ZUGA, Mart Kangro and Katrin Essenson take part in the Aerowaves festival in Holland. It was a weeks’ worth of excruciating discussions, justifications of oneself and of the artist, explanations as well as posing difficult questions to others.

I’ll recite from memory a discussion between the mentor Jan Ritsema and Katrin Essenson.
• What is it you’re doing on the stage?
• Um, I’m examining the way the body is performing.
• In what sense?
• In the anatomical sense, for me it’s interesting.
• Could you be more specific?
• Well, I’m trying to define the essence of individual body parts.
• ???
• it all started with traumas, and what I want to understand is the difference between prior trauma and post trauma and whether it will lead to any new knowledge or experience.
• But in reality, what is happening on the stage?
• It’s a dance performance…….
• Katrin, why don’t you want to tell us what you’re up to on the stage?
• But I told you.
• No you didn’t, I want to know precisely how you examine things and what are you really showing the audience?
• Well, then you’ll have to come to my show, I don’t want to talk about it.
• Then we have nothing to talk about.

In 2016, fourteen years later, same questions are still standing and the artists are still giving similar answers. There’s no discussion on what is really happening on stage as the artists seem to be clinging to their mystic being by tooth and claw. Would a revelation, that in reality throughout the creation process the artist is often cracking their knuckles for ideas, somehow diminish the value of their art? Instead, we talk of atmosphere and excitement and energy, emptiness and void or worse yet, research and analysis.

Märt Väljataga claims that one of the requirements of academic writing is the exhaustion of the subject-matter. Everything needs to be written down meticulously, then processed and only then expressed comprehensively, there’s no need for artistic puns or lingering wittiness, the subject-matter needs to be exhausted. Naturally, all this was claimed tongue in cheek, as total exhaustion of something is impossible, if it were, we’d end up with one big void.

Lately, it seems to me that we’re faced with a conflicting situation. The artists, curators nor the producers talk about anything substantial, nothing is said which would allow the viewer/reader to relate to. We do it for sake of it - just in case, for self-defence, you never know when an uttered sentence could boomerang back at you. The other reason to fear spoken word is that we will not be able to defend it to the very end, this may not be a firm knowledge, but just a simple opinion.

In an interview to Jaanika Valk, Priit Raud says that those who cannot grasp the allegory of words might be able to grasp visual language instead. What is this visual language? Gestures and grimaces? Moans and panting I would classify under language. Obviously the context is important, whether the conversation takes place behind a pint or at an office, but this also is not a visual. What remains is the colour of the wall in the background and the image of the conversational partner, maybe then, it’s the spreading of colours. At the moment a touch of red is spread on a flag, it is becoming a symbol. If a woman is laying down, she’s waiting – therefore, she’s yet to get laid, when a man is laying down, he is resting – therefore, he just finished fucking her, etc. However, the audience reads all the information and ultimately gives meaning to things according to their mind, the structure of which is very similar to the structure of the language.

When imagining a situation where one visual communicates with the other, I’m faced with an absurd outcome - there’s some pushing and shoving, whereas one party would rather not say anything and the other would rather not hear anything. A widespread and pretty nifty saying goes something like this – if I knew how to formulate my performance, I wouldn’t have to be doing the piece. Ok, the artist is acting on a hunch and might get a feeling that there’s something there, which cannot be formulated just yet. And that’s pretty good, there’s potential for occurrence of something not yet created and existing, of something that cannot yet be put into words.

As intuition works faster than reasoning, adrenaline kicks in. Acting on intuition makes one far happier, than acting on reason. The reasoned mind tends to constantly pose new demands as well as strive for objectivity. This is when things get worrisome for the artist, what if the creation was caused by the previous, as a consequence of something – of thinking, of formulation or discussion. I can imagine the empty feeling when the realisation sets in that it wasn’t a miracle after all. And what’s worse, the subject-matter might get exhausted and instead of desired eternity there’s just an empty void.

The intuitive action is a highly subjective experience, like a bone, it has yet to be cast for the masses to chew on, moreover, there’s not a general clue as to what we’re really dealing with. But at one point it’ll happen, the moment the audience is in there. It would be a charming situation, but after leaving the said situation, those who previously would not want to hear will start wondering, thinking and decoding. Why have we, the performance artists, left this solely up to the audience? Why does the public have to work harder than us? Seems unfair somehow. And this is where I consequently get the feeling that I’m on a wrong track. The artists do know what they’re up to, they just don’t want to let on, no one wants to destroy a miracle.

One could, however, reason altogether differently. Let’s say, I’ll formulate my initial idea. It will seem charming at first, but when I share it with others it will fall apart and become banal. This is not a sign that I’m incapable or that I don’t know how to put out a piece, but rather this is where the work shall commence. It is likely that even the thirteenth version shall fall flat when put up against the most prominent of philosophers, and the words are lacking. It’s at moments like these turning to the visual or atmosphere or God knows what else mystical, might actually be a good idea.

I find that each thought should be voiced so that there would be hope for the ultimate realisation. This realisation can also change, and that’s OK, this is how things function, and in my world it’s called – work. There are a few geniuses out there, but a lot more of those who are willing to work, and such realisation would simply bring about more work. Not always a better result, but life would be more exciting, transparent and the relationship between the audience and the artist increasingly multi-layered.

All in all, it’s all about living, whereas all sides are trying to perform some sort of an act. If the act is public, all parties should be involved. Ordinary subjectivity and personal intuition do not suffice in order for the miracle happen on stage, it’s about the involvement of different individuals whose prejudices, experiences and hunches are totally different and who are bound to start defining and formulating regardless of the authors initial feelings on the matter. 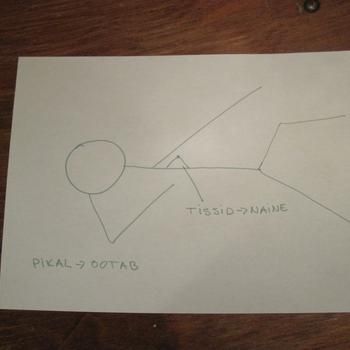 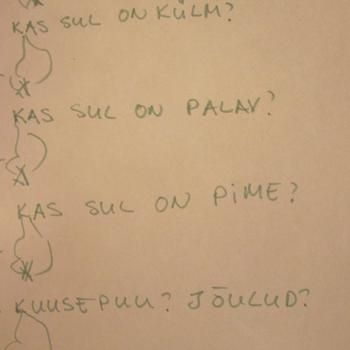