From September 2022, I will be the editor of MAGASIN. I must begin this "statement" by apologising. In early 2022 I said in an interview to Kaja Kann [1] that I did not want to be the editor of MAGASIN. "Of course, in my head I can separate myself from the house where I work. It would be exciting to be critical of the house where I work, but I still can't shape the magazine as an employee. If I'm critical of the house, then I'm self-critical. As an employee, I take criticism on board and try to change things; it's not my job to reflect the house from the outside. Besides, I'm not the only cool young person. Let others do it." Sorry for the quick change of mind.

Direct or implicit criticism of the house and the scene is certainly a necessary part of the content of the performing arts online magazine, but not all of it can be dealt with immediately. I may be young, enthusiastic and occasionally naive, but I don't have the tools to quickly solve all of the problems occurring in the scene. In some cases, a break in the form of a text is necessary to solve the problem.

Self-criticism is perfectly okay and I'll continue to pursue that.

There are many cooler young people out there than me and I hope they are all willing to publish their thoughts in MAGASIN.

Finally, I have to admit that starting as editor of MAGASIN is a purely practical choice - I've been doing the adiministrative work for the last year anyway. My place is between the online magazine and the writer, seeing myself as a little secret spy who does nothing else but listen in on smoking corner conversations, asking "hey, why don't you write about this?".

As an editor, I am still open to all offers - texts with an established style, experiments with form, texts that are constantly changing and those that are off-topic. I keep my eyes and ears open for anything that speaks to artists (also on an individual level). And yes, perhaps I am most interested in the bottlenecks that I perhaps have even “helped” to create by working in the field, and which I cannot contribute to improving through direct action. I have developed a kind of love-hate relationship with the scene. I still don't understand why some things are the way they are. Maybe MAGASIN can help to change the questions or find answers in this. And for the record, although I work as a house dramaturg at Kanuti Gildi SAAL, MAGASIN does not become a commercial channel for SAAL.

Finally, thanks to all the previous editors of MAGASIN! And I also include a statement written by Maike Lond in 2016:

"Life is a bitch and then you die, says a friend artist in situations that often occur in the performing arts - rehearsal day is bumpy, stage is the wrong size, minibar is empty, head is empty, or the after-the-fact truth contradicts everything you thought you knew. But that's not all!

MAGASIN is a place where one liners are secondary; a place that opens the door to the thought processes of artists and guests; where makers and audience can have their say. For performance, namely, is only a fragment of the complex and fascinating web we call the performing arts.

Your material will be published largely unedited, because this space is not a conventional reading space - rather it can be thought of as a testing space for ideas, thoughts, observations and responses to create the ever-changing open discourse of the performing arts." 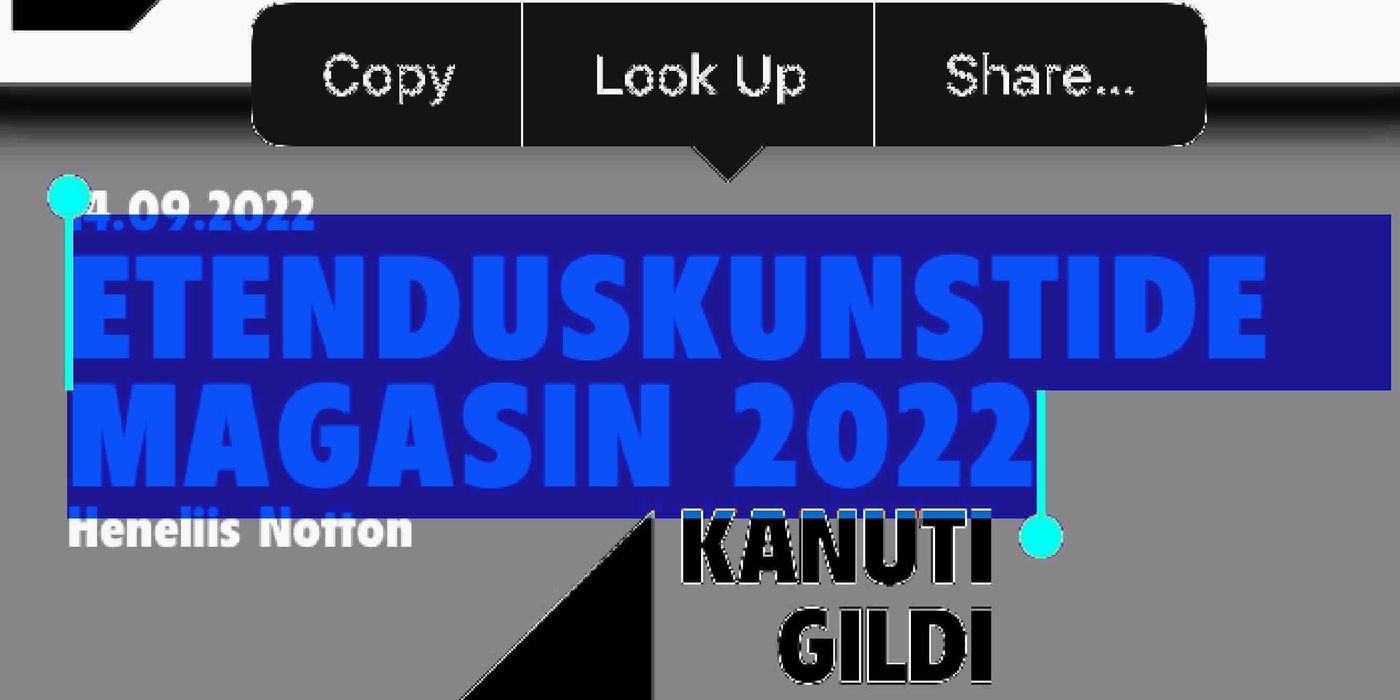