This summer I decided to be stubbornly unproductive and utterly lazy, persistently bored and extremely unmotivated, un-charming, very tired and unconcerned.

First of all, I cancelled all of my involvements and commitments, I stopped making promises, quit stressing and no longer tried to be any other version of myself than what I was.

As the first day of my ‘’new age’’ had arrived, I decided to get out of bed with a jump, as I was highly excited! I swung my legs over my head in a helicopter twist; as they were about to reach the ground, while pulling the rest of my body up, I heard a ‘’click’’ and felt immense pain somewhere in my lower back.

I crawled to the kitchen and stayed there, on the floor. The day was gone and so was my excitement.
In the next couple of days I barely made it to the toilet on my own, but oh my, couldn’t even pull my pants down, not speaking of getting back up..
Over the course of the few coming weeks, besides the limitations that I have set upon myself mentally, I would also have to deal with the limitations on the very physical level. My plan was working perfectly. Now, I was not only unconcerned, unmotivated, lazy and unproductive, but I was also in pain. The only activity that I could engage with was sleep.

Let me demonstrate for you how I slept:
https://www.youtube.com/watch?v=0AX3Dt9xU_g

And so my summer began.

Luckily, the weather was terrible and being in a horizontal position served my goals.

More and more I found myself in the state between being awake and being asleep, not there nor here. The thoughts became liquid and had no time and no space, no boundaries, no body, no weight, no context. In that state I managed to create a new piece, write a couple of books, visit some other galaxies, find unconditional love, meet a giant blow up squirrel, see some pissed bulldogs flying into my window, make an epic mass dance, get a horror story of how I was performing and nothing was working because I had no hands, no eyes, no legs, no hair, no spine; to forget it all, to remember some bits and pieces again, forget all of them again, visit the void, the Milky Way and get back to the core, puzzle everything up, find some logics, forget the logics and the rest was blurry.

Now my back got better.

But one day I woke up and my index finger was two sizes too big. At first I thought I didn’t correctly remember the actual size of my finger or that it was an optical illusion. But when I couldn’t move it, I understood that something must have gone wrong.
So I went to a doctor. The doctor sent me to get an x-ray, the x-ray showed that everything was at the correct place and the doctor indicated that my finger should have been working properly.
I went home, confused and still unmotivated. Slight irritation had crawled under my skin. A week went by and the finger still didn’t move.
So I went back to the doctor, who this time took my blood and did some other tests. The results were great, everything appeared to be working properly, hence the finger should have never gotten swollen and be working as a typical index finger.
But it didn’t!
The doctor sent me home. Again.
The finger violated the order of all the things and was stubbornly swollen.
I decided to continue with the state of disengaging and not to be concerned. So I forgot all about it.

Let’s go back to the thought of having no commitments, no ideas, no plans… the charms in doing things with very minimal effort suddenly played a trick on me.

Now I found myself in the middle of a writing class, with the same laziness and lack of ambitions, creativity and will, doing yoga every morning, I also enrolled myself into a program of face fitness (omg! I know!), meanwhile without noticing I was preparing new consults for my style clients, applying new knowledge in writing (which I now do on regular bases as an exercise). What!?
I started to read books, rearranged my office, reorganized all of the closets, the basement, hired a booth in a shop, sold all of my old stuff, rearranged the apartment, bought many new books, created tons of new outfits for my friends and relatives, attended a wedding, read a Post-Dance, talked about Post-Dance, had the best idea about the presentation of the Post-Dance, lived the Post-Dance, danced it, ate it, exorcised Post-Dance, then I went to Massia for a week, went shopping in Kalverstraat, attended some webinars, had some dinners, sent a physical letter to my grandmother and still had all the time on earth to think about my friends. I also edited lots of other people’s texts, wrote some new articles of my own and !the unthinkable! answered all of my emails, messages and missed calls!
And all of that without any force, low effort and no motivation.

And my finger is still fat!

Because I am so unconcerned about everything at the moment, I have tons of pointless time on my hands, which allows me to think about anything or everything, at the same time. Due to the given circumstances, I would like to talk about the only relevant and important thing at the moment: the history of a beauty spot or, simply, a mole!
Because why not? And because we can.

Perhaps, the first strong mental picture (my new expression that comes from the writing classes) of a beauty spot, beauty mark or simply a mole, comes to your mind in a shape of Marilyn Monroe, Cindy Crawford or Madonna.
But that is all fashion and irrelevant at the moment!

The history of the beauty mark goes way back.

In Medieval Europe, the beauty mark referred to the devil, precisely, the location of such a mole would point to the exact spot where the devil would have entered the body. If two moles were located around the throat area, it would be a special symbol, indicating the person is a witch. The witch would then be searched, shaved and tortured into confession. After confessing to being a witch, her head would get chopped off.
Wow!

In ancient Greece, people covered up their pimples with black patches of leather, which would remind of a mole.

Before the times of Mao Tse Sung in China, face reading, hand reading and mole reading were considered a science and were being used in military strategies and on a political level.
In ancient China moles were believed to be lucky and unlucky, that always depended on the shape, the placement and the size of the mole.

MOLES BENEATH THE EYEBROW(S) – disagreement with extended family member.
MOLES IN THE CENTER OF THE NOSE – bad bad sign of a tendency of overspending, over flirting and over gambling.
MOLES ON EITHER SIDE OF THE NOSE – the wearer may become extremely ill.
MOLES DIRECTLY ON THE LIP(S) – weight concerns, problems with diet and sexual relations.

MOLES DIRECTLY BENEATH THE EYEBROW(S) – intelligence, fame, creativity, success and wealth.
MOLES IN THE CENTER OF THE FOREHEAD – creative, hardworking, carefree spirit with the potential to become a great leader and entrepreneur.
MOLES ON THE END OF THE EYEBROW(S) – power, authority. Indicates a leader or a business owner.
MOLES IN THE CENTER OF THE SPACE BETWEEN THE NOSE AND UPPER LIP – potential of raising a large family.
MOLES EITHER SIDE OF THE MOUTH - a balanced, successful life. Women with these moles may be extremely beautiful.

My finger still bothers me today, therefore in case you find any mistakes, please know that it is the finger that is not fitting any of the keyboard squares and not me.

During the alluring 17th and 18th centuries, when flirt was considered a good tone, the beauty spots became something that everyone was wearing or wanted to wear.
Back then a respectable lady of good manners should have had the knowledge and skills to engage into a flirt mode with up to three gentlemen simultaneously; the flirt should have been tasteful and couldn’t break the rules of social behavior.

Rumors state that Margaret Cavendish, Duchess of Newcastle-upon-Tyne (1623 – 1673), brought the beauty spot back into trend. Margaret’s skin had a lot of flaws and wasn’t pale enough and therefore the Duchess used cut out pieces of black fabrics as a cover for her problematic face areas. She has also noticed that the darkness of the fake mole created a strong contrast to the skin, making it more pale.

Beauty spots were not always round; their shapes have been reinvented may times.
For example, a fake mole could be in a shape of a ship or a coach, it could be round, triangular or star shaped as well as it could mimic any object that one could imagine.

Depending on a mole’s shape and placement on the face, different beauty spots would signal different hidden messages.
A ship or coach shaped beauty spot would symbolize the agreement to run away together that night.
A moon shaped beauty spot was an invite for a night date.
A round beauty spot placed between the temple and the eye would be called ‘’killer’’, which referred to the very passionate owner of the spot.

And I insist that the mole language is a really important matter and productivity is not, I can’t stress this enough!

If a person put more than one beauty spot the interpretation of the subnarrative or the reading between the lines became complicated and was open to the imagination.

Let’s go to the fashionable beauty spots that we can decode:

THE BEAUTY SPOT BETWEEN THE TWO EYEBROWS – be frank.
THE BEAUTY SPOT ABOVE THE LEFT EYEBROW – rigidity.
ABOVE THE RIGHT EYEBROW – mockery.
IN THE VERY END OF AN EYEBROW – fidelity.
ABOVE THE RIGHT EYE - signified the joy about a date.
ABOVE THE LEFT EYE - showed the sadness of separation.
IN THE MIDDLE OF A CHEEK – taken.
IN THE LOWEST POINT OF THE LEFT CHEEK – declaring love.
BELOW THE NOSE – be aware, knowledge about intrigues.
ON THE LEFT NOSTRIL- possible.
ON THE RIGHT NOSTRIL – impossible.
IN THE MIDDLE OF A CHIN – guess.
ON THE NECK- I love you.
ON THE RIGHT SIDE OF THE LIP – not opening up.
ON THE LOWEST POINT OF A CHIN – please express yourself through a letter and don’t speak to me in public.

Today we can still walk the street ‘’Calle de le Moschete’’ in Venice, where fashionable fake beauty spots were produced. The ladies of Venice exhibited them on their faces and breasts. Star-shaped and heart-shaped moles were especially popular.
Roy Porter suggests in Bodies Politic that many beauty products, particularly the beauty spot patch that became fashionable under Louis XVI’s reign, were to hide signs of small pox, plague or/and syphilis.

Now it is a good time to mention that the science of interpretation of the position of moles and their meanings is known as moleosophy and its roots go back all the way to ancient Greece.

Here are some examples from ancient Greece and their interpretation:

Here we could say: ‘’We don’t give a damn about the beauty spots, we are only interested in Cava Brut’’.
The weather is great, the finger is still fat and I am out of smokes. 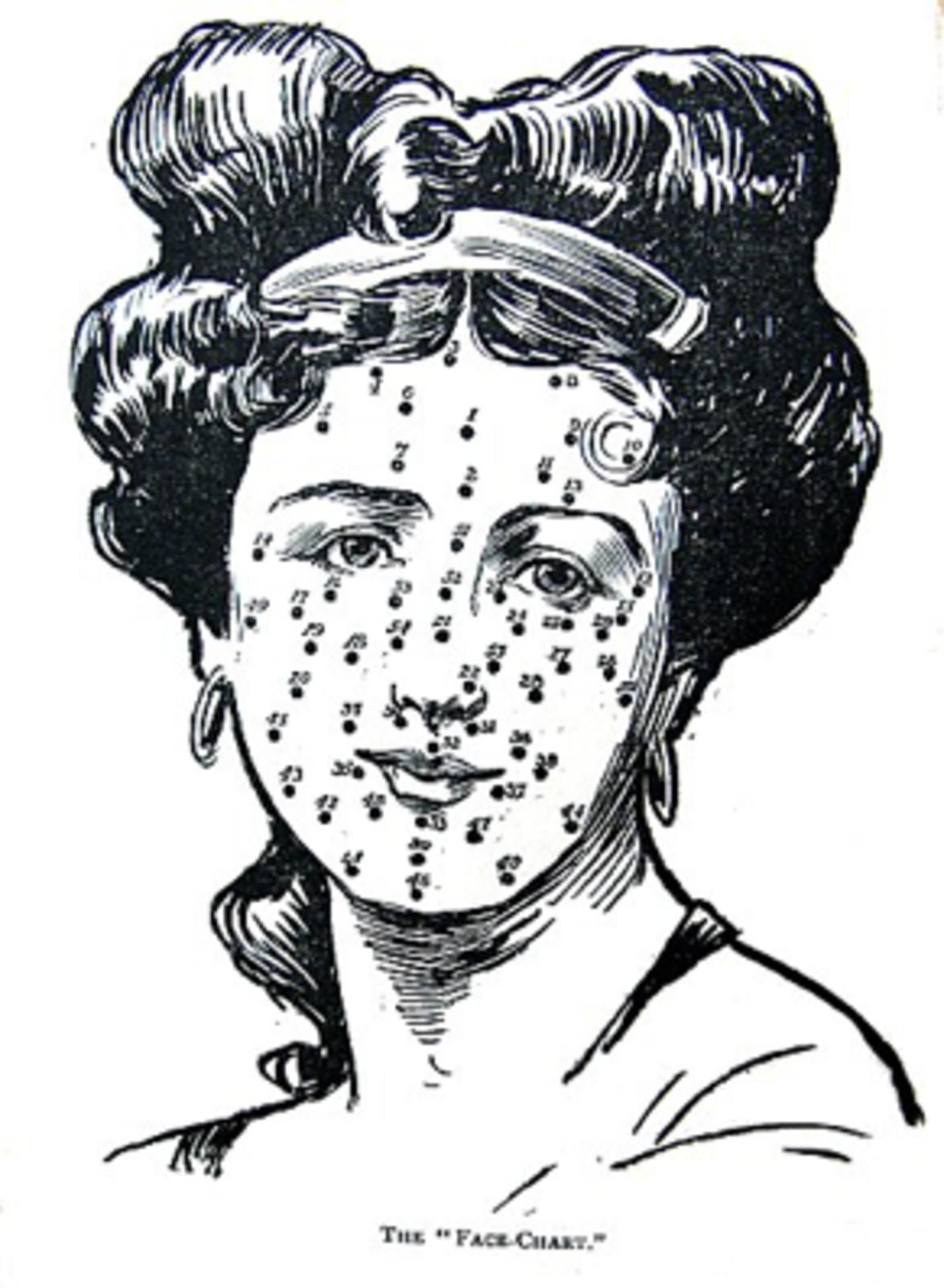